California is a giving state. The only downside is that it mostly gives odiferous goo from the third turn of a large intestine. True to form, the state has given the U.S. House of Representatives a bag of it in the form of Rep. Eric Swalwell (D).

Swalwell thinks that the wisest course of action for a politician is to take his legislative cues from teenagers. That is transparently a fantastic decision, one that will most certainly be appreciated by his GMO-free, pottery home delivery constituents.

“They dismiss the moral equivalence we’ve made for far too long regarding the Second Amendment. I’ve been guilty of it myself, telling constituents and reporters that ‘we can protect the Second Amendment and protect lives’…The right to live is supreme over any other.”

You read that right. Swalwell is apparently a pro-life Democrat. Clearly, we should take his rhetorical flourishes seriously. We should not doubt his sincerity or good will. Just look at all the times he’s voted to ban abortion and treat it like the murder it is. The right to life trumps any other, ya know?

And, because of that, obviously, we should contravene the 2nd Amendment, self-evident God-given rights be damned. So says Swalwell, the big “D” (“D” for Democrat), who advocates gun confiscation. Buy back the guns, he says, and prosecute those who don’t want to sell. “Give me your guns, or I’m sending guys with guns, because you’re the bad guy.”

Sadly, there are still some backward, backwood Americans who don’t like the idea of gun confiscation. Idiots. Don’t worry, though. Swalwell knows how to deal with such folks. 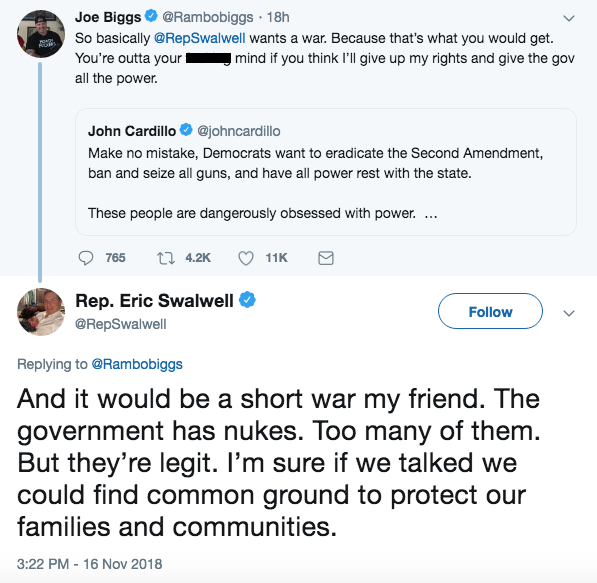 Mr. Biggs makes the observation that if the government decided to come for the guns, many a gun-totin’ American would say, “No thanks.” If a gun-confiscation policy was insisted upon, over and against the “no thanks” of the people, you’d get an exchange of fire. Sufficiently enlarge the scale and you’d have a full-scale war on your hands.

But, Swalwell assures us, such a war would be short-lived. Why? Because he’d support the legit use of legit nukes on legit Americans. He existeth not for the protection of the people. We existeth for his power. Like a saddened father, he would be willing to bomb us to glass.

This Democrat-backed, nuclear war on we the people would be short-lived. Just ignore the fact that there is a significant number of police officers and military personnel who take their oath to defend the Constitution seriously, men like Police Chief Loren Culp. Just ignore the number of well-armed Americans who live across the country and know the terrain better than any Democrat in Congress. Just ignore military history. Ignore the mujahadeen. Ignore the goat-loving Taliban. Ignore those pesky, skinny Vietnamese. Ignore Stonewall Jackson and the Swamp Fox. As far as that goes, ignore the entire First American War of Independence.

And gosh-durn it, don’t you dare go read a book. Don’t read Lord of the Rings. Don’t read Robin Hood.

No, this Democrat war would be short-lived. Nukes baby.

Don’t execute murderers. Do ban tools. Do nuke non-murdery men who insist on keeping those tools.

And kill babies. Lots of them. And sell their parts, because capitalism sucks.

Also, Christians, make sure to vote for Democratic Party candidates the next opportunity you get. They love you. And they’re for the oppressed. See?